The mural is enormous. Five hundred square feet of corrugated metal. Nhut Vo has five days to get it done but he is calm and optimistic as he chronicles the day-by-day progress. When the five days are up, it’s completed. From the side of the animal-rescue building, an enormous dog with a fierce face and soft, hopeful eyes looks calmly across the valley. 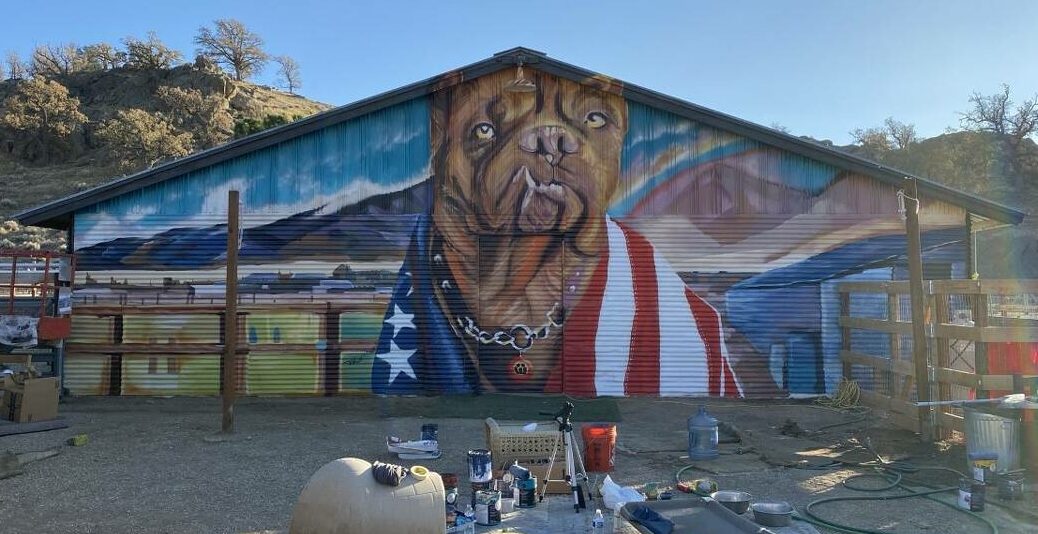 Perhaps it’s the best analogy for Nhut. The mural is an act of service to the organization and the animals it cares for. It’s also art, imbued with the personality of its creator. Service. Art. Beauty. And hope. That is Nhut.

A soft-spoken man, it’s difficult to imagine him in prison. Sentenced to two life sentences at nineteen for gang-related crimes he had committed as a juvenile, he spent years in the hopeless dead-end of a maximum-security prison. In 2017, he was resentenced and given a shorter sentence—life, but with the possibility of parole.

With his new sentence came a transfer to a prison with educational programs and opportunities. Nhut, who had taken correspondence courses in Buddhism and art during his time in maximum security, threw himself into every program that he could. When a flyer announced that Pawsitive Change, a dog-training program, was coming to the prison, he decided to try to get into that one as well, despite fearing dogs. Against all odds, he got in.

While he had learned a lot in prison, the most challenging was empathy. “There were times when I saw people in prison who were doing worse than I was, who needed that empathy. And I felt it, but it’s not something you can show in prison. I didn’t know how to do that, how to show that.”

One of the first dogs he was assigned to work with was Prada, a chihuahua mix. Small, terrified, biting any hand that came near her. And infamous—she had been seized in a hoarding case awful enough to have made the local news. When she was brought into the prison, she was too scared to walk. Any fear of dogs Nhut had disappeared when he saw her, vulnerable and alone, frozen solid with fear and ready to lash out. He knew how she felt. “She needed someone. She needed a bridge to being in a place where she could be comfortable. And it was our job to be that bridge.” 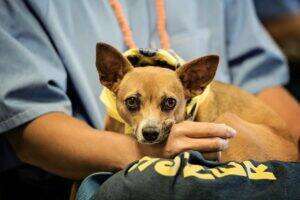 To learn to work with dogs was to learn to be self-aware. If he wanted Prada to be confident, he had to be confident. Learning to heal a broken dog meant learning himself, being able to ground himself, learning to feel the dog’s energy and offer back calm and stability. And learning to express all the empathy that he had bottled up and puzzled over during his long years in maximum security. As Prada learned, Nhut did too. Not only to show empathy but how empowering, how good it felt to help others. “You stop thinking about what you need and aren’t getting when you have all the things available that you can give to help,” he remembers.

At the end of Prada’s time in the program, she was the only dog not spoken for by outside adopters. Nhut called his parents. “I told them they had to adopt this dog. We had never had dogs, but they did it.”

While Prada moved on to life outside the prison, Nhut stayed. He worked with more dogs, eventually becoming a mentor and trainer to newer inmates in the program. He was good at it. He had so very much to offer, not just to animals but to those around him. And he was eager to do it.

In 2020, Nhut walked out of prison very different than the teenager who’d gone in twenty years before. He lives in California with his wife, parents, and dogs—including Prada. He now works for the Boundless Freedom project, teaching meditation and Buddhist practices to those impacted by incarceration. He also trains dogs, continues to work on his art, and shares his experiences to help others.

The man who didn’t know how to show empathy, didn’t think he had anything to offer, is now a man whose life is built around showing empathy and offering everything he can—his art, his compassion, his time—to all who need it. “Working with animals can transform you. In learning to express empathy with animals, I learned to express it with people. And I learned how much I had to offer. I learned to love myself as well.” 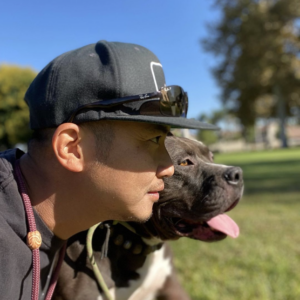